Platelet researchers have run two recent outreach events to highlight our work to members of the public. 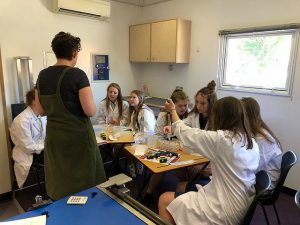 Ingeborg Hers, Samantha Moore & Gail Born at the University of Bristol took part in Skirting Science at Churchill Academy, on 28th June 2018. Skirting Science is an award-winning event organised by Soroptimist International, that aims to inspire the next generation of female scientists. They delivered a workshop that provided a hands-on experience of being a research scientist. Activities included using pulse oximeters to measure heart rates and the oxygen content of their blood, how to accurately pipette and performing size exclusion chromatography to separate proteins found in blood.  Photos can be found here. 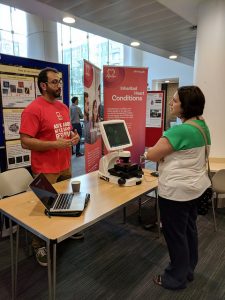 Gayle Halford and members of the Birmingham Platelet Group organised an event for regional BHF Supporters; the day kicked off with talks from the BHF’s Chief Finance Officer, Martin Miles with a Review of the Year, and a video by the Medical Director Professor Sir Nilesh Samani about the BHF’s research strategy and fund raising campaigns and achievements. This was followed by a talk highlighting some of the excellent work that is on-going in the Institute of Cardiovascular Sciences. The Supporters were then taken on laboratory tours, experienced and interacted with two major forms of cardiac assessment – cardiac magnetic resonance imaging (MRI) and cardiopulmonary exercise testing, and were given the chance to look down microscopes at cells, learn to pipette and play some fun games. We also had some excellent posters illustrating some of the research that is being undertaken in the Institute.  We have had some really great feedback from the visitors and the BHF, and we would like to take this opportunity to thank all those who took part and worked hard to make the day so enjoyable and worthwhile for all those who attended.  Photos can be found here.