The Platelet Society has been formed through the coming together of
The UK Platelet Group and The Platelet Charity.

A brief history of each organisation can be found below:

UK Platelet Group
The UK Platelet Group was an informal alliance of scientific research groups in the UK who shared a focus on platelet-related diseases. The first meeting of the UK Platelet Group was held in Oxford in 1998 and attracted over 70 people. Since then, the meetings have grown in size with ever increasing numbers from the UK and overseas. The meetings were held annually across the UK until 2012 when it moved to a two year cycle.  The main feature of the UK Platelet meetings is a strong focus on supporting early career researchers, including students, by providing them with the opportunity to present their research. The meetings are made possible through the generous support have by industrial sponsors, the British Heart Foundation (BHF) and the British Society for Haemostasis and Thrombosis (BSHT).

In 2001 the meeting portfolio was expanded to establish UK Platelet Summer School. The aim of these meetings were to provide an educational forum for PhD students and postdoctoral fellows who are new to the field of platelet research. Expert researchers deliver a series of lectures, workshops and small group discussions that provide and overview of all aspects of platelet research, from basic sciences through to clinical research. The meetings are held every 3 years with generous support from BHF, BSHT and industrial sponsors.. The first four were organised by Prof Steve Watson (University of Birmingham) but are now led by Prof Jon Gibbins (University of Reading).

The summer schools are a fantastic way to train the next generation of platelet researchers and emphasise the UK Platelet Group’s commitment to supporting early career researchers.

UK Platelet Charity (Registered Charity : 1151168)
The remit of the Platelet Charity (original name Funny Blood) was to increase awareness of platelet related diseases (and not just bleeding). It did this by running a web-site and other social media channels, producing fact sheets, funding small pump-priming grants and organising fund-raising events in the Wiltshire/Hampshire/Worcestershire area. The Charity was in existence between 2013-2017. The charity reformed as The Platelet Society in 2017 following the merger with the UK Platelet Group. This brings together everyone from patients to clinicians to scientists, to fully support all research and education in platelet-related diseases.

Looking for a PhD/PostDoc?

Job Board https://t.co/9nyp8MaNhL via @wordpressdotcom

Their data suggest that high fat diets may lead to increased chance of heart disease and blood clots. 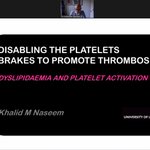 A fantastic achievement from young Thomas Halford, who, with his mum, has climbed Everest during lockdown to raise money for the The Platelet Society! A huge thanks goes to Tom's air cadets 495 (Sutton Coldfield) Squadron, who supported and encouraged him throughout his climb, even providing ice picks and Tibetan prayer flags!

Thomas and Gayle Halford would like to sincerely thank everyone who has kindly sponsored them.

I spy a chin-up bar in the doorway. Chucking in a couple of reps on each flight eh Gayle?

Well done to Tom, who has been fundraising for the Society by climbing Everest during lockdown, using his stairs. His Air Cadets squadron have been supporting him along with way, and even promoted his endeavor on air, army and navy squadron social media pages throughout the country!

If you would like to sponsor Tom and support the Society, you can do so here:
www.kindlink.com/fundraising/The-Platelet-Society/labtolab2020

Thank you to Tom and 495 (Sutton Coldfield) Squadron for helping a great cause! ... See MoreSee Less

A special thanks to the Italian groups who have also joined us along the way!

So how do we top that? Well, we all clearly need to cool down properly and so we are making our way back to Reading meeting there on Sunday night for a well deserved drink! 🥂🍻

And don't forget – you can always make a small donation to the Society to help support our Early Career Researchers training – just visit:
kindlink.com/fundraising/The-Platelet-Society/labtolab2020

Find out more about the challenge here.
plateletsociety.co.uk/platelet-labs-link-up/

Thanks for your support! ... See MoreSee Less

The Platelet Society is feeling motivated.

This week's amazing efforts means we are well beyond our initial plans; we have already visited Milan, & so the challenge for the final week – can we get to Santiago and then all the way back to Reading? Find out more: plateletsociety.co.uk/platelet-lab-link-up-progress/

Don't forget, you can still get involved by adding to our kms! If it's too hot for you to exercise, then feel free to sponsor our athletes. More info on both can be found here:
plateletsociety.co.uk/platelet-labs-link-up/

Thanks for your support! ... See MoreSee Less

Week 2 has seen us maintain our progress and acheive another 1793 Km towards our target.This means that we have now visited all of the UK Platelet Society members labs and are making big inroads towards our European members labs. We are currently around FontaineBleau in France having visited Maastrict and Paris!

Let's keep on pushing ourselves towards the target. Who knows, we might have to find additional labs to visit for our final week!