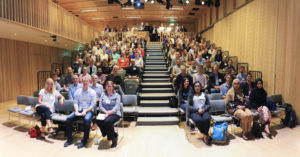 With the college motto translating as “May your journey be successful”, there was perhaps no more apt place to hold the first full meeting of The Platelet Society than Jesus College, University of Cambridge. Upon arrival at the venue success seemed assured, as the conference hall was already bustling with a sea of familiar, friendly faces, as well as a variety of new faces to get to know. After the welcome address by Matthew Harper in which we were educated of the many “traditions” of Jesus college, the first session on Platelet Formation and Function was kicked off by Alessandra Balduini. Alessandra showed us how the bone marrow extracellular matrix could influence megakaryocyte development.

The second Platelet Pharmacology session introduced a new partnership with The British Pharmacological Society, and was kicked off by Margaret Cunningham who delivered an engaging cautionary tale on how to interpret the anti-platelet actions of PAR-targeting pepducins. Another highlight from this session was Amanda Unsworth’s talk, who showed us why we should all be living the gourd life. The final session of the day examined new ways of working with platelets. This began with the Izon Science-sponsored talk delivered by Jonathon West in which he described the way microfluidics can be used to assess platelet function at the single cell level. Further talks demonstrated how a variety of new technologies are now being used to explore platelet function in novel ways.

The Platelet Society then held its first AGM, in which Khalid Naseem handed over to the incoming chair, Jon Gibbins. Jon thanked the interim chair for his vital contribution in steering the development of the fledgling society. After a lively and enjoyable poster session in which everyone got a chance to discuss a wide variety of excellent research, as well as network in the courtyard on a glorious September evening. Everyone was then treated to an excellent meal in Jesus College Hall, in which we were well looked after by the fabulous college staff. The merriment soon spilled over into the college bar. With the basement hosting a DJ and dancefloor, Nick Pugh and Kirk Taylor acted as revellers-in-chief to ensure that the dancefloor was busy until closing time.

At the start of Day 2, there was no obvious drop in enthusiasm from the audience due to any lingering ill effects of the previous night’s fun. The first session of the day examined interaction of platelets with a range of other cells including bacteria, fungi, cancer cells, macrophages and endothelium. The final session contained talks on how HSP47, GPVI and FcɣR can facilitate platelet interaction with the extracellular matrix.

The meeting was rounded off with the inaugural Gustav Born Memorial lecture given by Richard Farndale on the role of vessel wall collagen’s in thrombus formation. Richard is a worthy recipient of this prize lecture, as like Gustav, he has had a far-reaching impact in platelet research both in understanding how platelets trigger thrombus formation, as well as providing invaluable experimental tools that have been invaluable to other investigator’s research. We will all greatly miss Richard as he enjoys his retirement. Matthew and the rest of the local organising committee should be congratulated on organising such a fantastic meeting. If this meeting marks the beginning of our journey together as a society, it seems like we’ve set off with our best foot forward.

Congratulations Giordano on completing the #londonmarathon2021 in 3:34:12

You can sponsor this heroic effort here 👇

Giordano is putting in a stonking effort!

No turning back now…

We’re so proud of our #MarathonMan Giordano. Please do sponsor him to help him get over the finish line with a PB.

It’s been a miserable day in London so every little helps!