GAPP – Genotyping and Phenotyping of Platelets 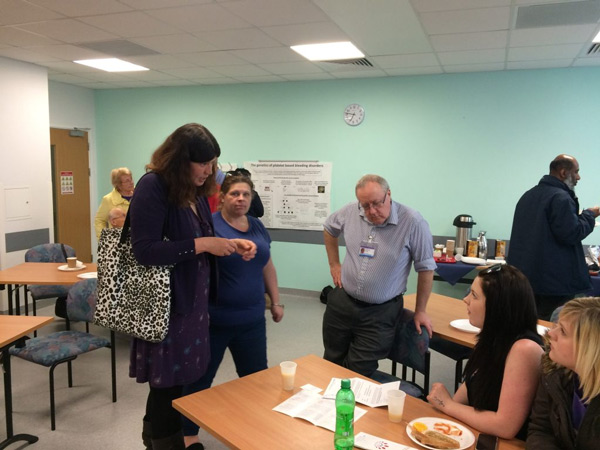 The University of Birmingham has hosted a talk on a recent project that has been undertaken across a number of research units, on the Genotyping and Phenotyping of Plateletlets (GAPP). Patients heard from the consultants on their findings and the importance of continuing this work to identify more about Platelet Function Disorders (PFDs)

Our PRD Community:
“It has been fantastic for my family to be involved with the Gapp study. For generations we never knew exactly why we bleed and the study has provided us with the opportunity to look into this. We are very grateful for the work that has been done and thrilled to understand our platelet disorder in more detail.
Alexa Khokhar”

Whilst the nation was queuing to vote in last night’s election, a number of families were attending a talk at Birmingham University on a recent research project that they had been involved in. Genotyping and Phenotyping of Platelets, or GAPP for short, is a research group based in Birmingham, Bristol and Sheffield, who are working together to research patients who have problems with bleeding and may have a problem with their platelets.

Ben Johnson’s paper on the discovery of new genes through the GAPP project was one of the top 10 abstracts at ISTH out of over 2,700 that were submitted. Ben Johnson is one of the researchers within Prof Steve Watsons’ team at University of Birmingham participating in the national Genotyping & Phenotyping of Platelets Project (GAPP).

A Service in memory of Victoria Simpson