The Unit of PLatelet Activation (UPLA) is part of the research activity of the Department of Biology and Biotechnology of the University of Pavia, Italy. Located in the historical Cascina Cravino, in Pavia, the research group is composed of Prof Mauro Torti, Gianni Guidetti and Ilaria Canobbio (Platelet Society Executive committee member), together with Mauro Vismara (post Doc Fellow), Luca Galgano and Silvia Trivigno (PhD Students) Active collaborations with clinical colleagues at the hospitals Policlinico San Matteo in Pavia and Centro Cardiologico Monzino in Milano are in place to drive translational research. Cell factory, flow cytometry and sorting, advanced microscopic techniques, CrioEM, and animal care facilities are available at the Department of Biology and Biotechnolgy, recently awarded with the title of Department of Excellence by the Italian Ministry of University (MUR).

Research activity of the UPLA lab encompasses fundamental aspects of transmembrane signalling in platelets. Circulating blood platelets are known to play a crucial role in haemostasis, thrombosis, but also in inflammation, neurodegeneration, and cancer metastasis. Understanding the precise contribution of platelets to these events is a big challenge for the future and may provide promising opportunities in biomedicine. 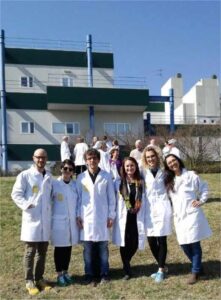 Three main research topics are currently investigated in our lab:

1) Analysis of platelet signal transduction pathways in thrombosis and haemostasis, with a focus on the role of tyrosine kinases (Src kinase, Syk, Pyk2, FAK) and phosphatidylinositol 3-kinase (PI3K) in platelet adhesion, activation, and aggregation. Recently, the analysis of the role of the tyrosine kinase Pyk2 that is highly expressed in platelets has evidenced a crucial role for Pyk2 in the regulation of platelet activation, arterial thrombosis and bleeding, and new studies are on going with the use of specific Pyk2 inhibitors and Pyk2-deficient mice. (PI Mauro Torti)

2) Analysis of amyloid precursor protein (APP)  metabolism and amyloid Aβ peptides function in platelets. This project is aimed to understand the correlation between haemostasis, thrombosis, and Alzheimer disease. Human platelets express high levels of APP and produce amyloid Aβ peptides. We have demonstrated that APP is a critical regulator of venous thrombosis due to its protease inhibitor domains. On the contrary, Aβ peptides activate platelets and generate ROS, thus contributing to a pro-thrombotic phenotype. (PI Ilaria Canobbio)

3) Analysis of the contribution of platelets and platelet-derived microparticles to cancer metastasis. Efficient metastasis  is strongly influenced by host-cancer interactions and platelets are key players in cancer spread as  a reduction of platelet count, as seen in thrombocytopenic patients or in platelet-depleted animal models, is associated to reduced metastasis. This suggests that pharmacological inhibition of platelet activation could represent a novel approach to control metastatic diffusion. The goal of this study is the understanding of the molecular mechanisms behind the contribution of platelets to cancer spread. Our attention is focused on the role of platelet-derived microparticles (PMPs), that represent important carriers of biological signals. (PI Gianni Guidetti)

As part of the Course of Life Science, Biology and Biotechnology, the UPLA lab trains students for bachelor and master’s degree, and host PhD students from the IUSS (Istituto Universitario di Studi Superiori) and the PhD in Life Sciences.

Dissemination events are regularly held in the secondary schools of Pavia, both in the form of seminars and as practical activities in the laboratory, when possible. The last Friday of September, the European Research Night in Pavia represents a great opportunity to engage children in science with an hand-on approach.

More information about our research can be found here (https://dbb.unipv.it/eng/biochemistry-of-the-vascular-and-respiratory-system/)